"I loved the Liszt".
A very refreshing performance of the Liszt Rhapsody No. 12 . I could feel this piece's Gypsy spirit when listening to Mr. Bogdan's recording. Wonderful rubatos, very good colors.
A lot of humor as well. 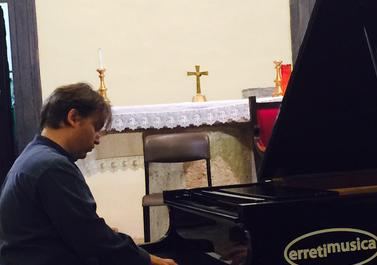 Exquisite Artist
Valentin is an exquisite pianist. I liked the Bach the most. Very musical, very imaginative playing, I felt like i was listening to a solo violin or cello suite as opposed to a piano piece. I look forward to his next album

Dr. Valentin Mihai Bogdan is an award-winning composer and pianists who currently serves as Assistant Professor of Music at Mississippi University for Women. A native of Romania, he toured as a teenager throughout Europe and Asia, in Netherlands, Great Britain, France and Jordan.  Throughout his career, he has received many awards including Second Prize at the Varna International Piano Festival (Concerto Competition), winner of the WSU Concerto Competition, semifinalist in the American Prize, and winner of Livonia Arts Commission Award, Mu Phi Epsilon Prize, ASCAP PLUS Award, Lougehead Eldrige Scholarship, and Rebecca Katzaman Frowman Award.

As a pianist, Valentin has performed solo and chamber music in Europe,  Canada, and in the US (in the states of Alabama, Arizona, Arkansas, California, Colorado, Florida, Georgia, Louisiana, Michigan, Mississippi, Tennessee, Texas, Oregon, Virginia, and West Virginia).  He was a soloist with the Starkville Symphony, Assisi Performing Arts Orchestra (Assisi, Italy), Varna Symphony (Bulgaria), Wayne State Symphony (Michigan) and the Arizona Western College Wind Ensemble.  He has also released two albums, “The Grands of Piano” and “Live in Concert.”

His compositions were performed at numerous concert series and festivals, such as Festival Miami, Music at MOCA Concert Series (Miami), the Oregon Bach Festival Composers Symposium, Assisi Festival of Performing Arts (Italy), and the St. Joseph Catholic Church Concert Series in New York.  His music was also chosen for performances at conferences hosted by the College Music Society, NACUSA, and the Society of Composers Inc.  He has had works premiered by the musicians of Cleveland Symphony Orchestra, Betta Collide Ensemble, Duo Trivella, Bergonzzi String Quartet, Miami Youth Symphony,  Clarke String Quartet, Grambling State Concert Band, Grambling State Chorale, and Black Bayou Brass Trio. He was commissioned to write new works for the Starkville Symphony, University of Alabama Birmingham Trumpet Ensemble, trumpet virtuoso James Zingara, and the Dranoff International Two Piano Foundation of Miami. He was the 2015 Mississippi Music Teachers Association commissioned composer of the year,  and the 2010 Florida State Music Teachers Association commissioned composer of the year.  His music can be heard on Ravello Records.

His research interests include Romanian music of the 20th century, and the various practices of music business and industry. He has given papers at conferences hosted by the College Music Society, Florida MTA, and Mississippi MTA.  Dr. Bogdan is the executive director of Music for All Ages, a community outreach program bringing classical music performances to schools, churches, and retirement homes. He is also the founder of Festival Yuma, in Yuma AZ, and the Downtown Community Concert Series, in Miami FL. An active clinician and pedagogue, he has conducted workshops and master classes in Florida, Mississippi, Louisiana, Arizona, West Virginia and Michigan, and is constantly called upon to  judge numerous piano competition across the southeastern US.